December’s figures are out allowing us to look back at overall sales of electric cars and plug in hybrids in the last year. Figures are as published by the SMMT. 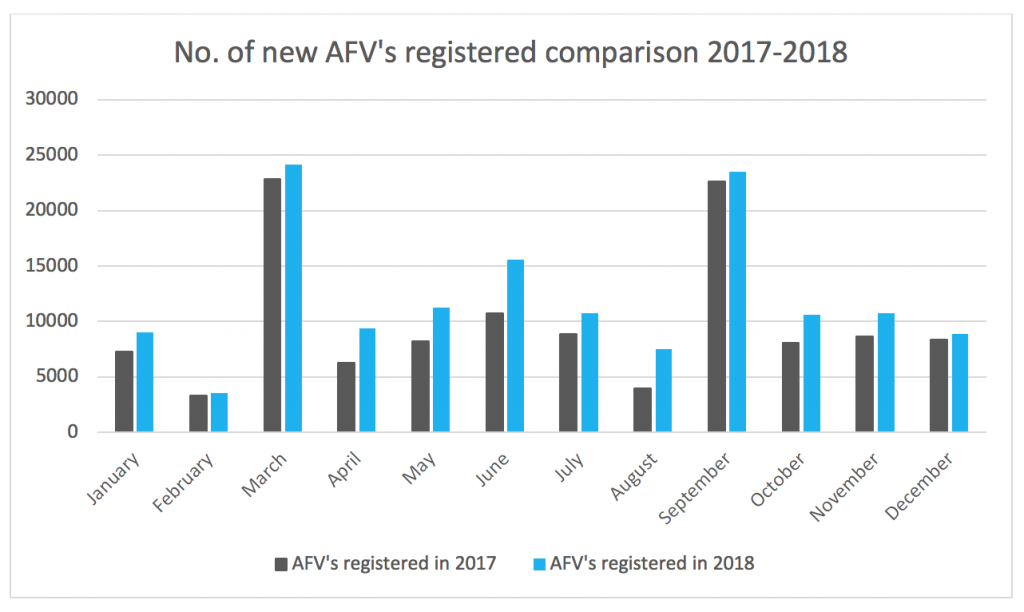 The popularity of electric and hybrid cars has continued to grow each month.  Battery electric vehicle sales sustained an increase of 59.3% when compared to December, 2017. This marks a continued growth curve for AFV’s in an otherwise declining UK new car market.

SMMT published data shows that the UK new car fleet average CO2 rose by 2.9% to 124.5g/km, despite significant investment towards efficiency by car manufacturers. This rise was, in part, due to the introduction of more accurate WLTP CO2 emission testing methods, which produce higher overall numbers.

The UK new car market declined by 6.8%, resulting in a total of 2,367,147 units. According to Society of Motor Manufacturers and Traders (SMMT), a 5.5% decrease in December 2018 when compared to December 2017, was due to a year of model changes, anti-diesel policies and “regulatory upheaval”.  The market for diesel cars was the most notable – shrinking by 29.6%.

Private, fleet and business registrations all fell in 2018, with the biggest losses felt in the fleet sector (down -7.3%), while private motorists and smaller businesses registered -6.4% and -5.6% fewer new cars respectively.

“A second year of substantial decline is a major concern, as falling consumer confidence, confusing fiscal and policy messages and shortages due to regulatory changes have combined to create a highly turbulent market. The industry is facing ever-tougher environmental targets against a backdrop of political and economic uncertainty that is weakening demand so these figures should act as a wake-up call for policy makers.”

Adding to his critique towards the UK law-making bodies, he said:

“Supportive, not punitive measures are needed to grow sales, because replacing older cars with new technologies, whether diesel, petrol, hybrid or plug-in, is good for the environment, the consumer, the industry and the exchequer.

Finally, more than 80 exciting new generation models – 31 of them plug-in electrics – are set to make their showroom debuts in 2019 as the UK new car industry is continuing to invest to grow at a consistently positive rate.”